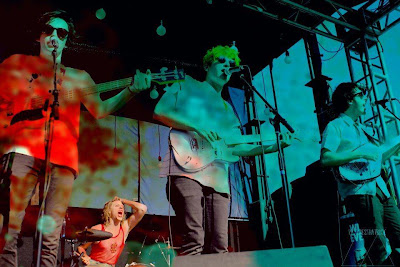 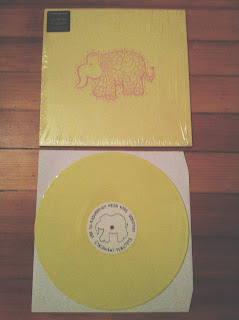 They released it with Burger (BRGR049) on a limited run of 250 red cassettes. I was lucky to snag one because the cassettes are long gone by now, but they did re-release on vinyl a year later - several different versions. A few of us were lucky enough to get it on 'Easter Egg Yellow.' This self-titled is one hell of a first cassette. It's hard to pin-point tracks of interest on albums that are so solid, but if you are pressed for time (these are full length songs ladies and gents) then check out Neon Kids, Dorothy, and Yer So Rad. Actually, if you are pressed for time then wait. This album should be listened to in its entirety. Cosmonauts will gladly drag you through ups and downs of psychedelia - upbeat hip shakers, downbeat droning trance, eastern inspired instrumentals, and lazy nearly-inaudible vocals. There may be many ways to play music but they make rock and roll the way it should be made. If this album isn't something you can dig on, then don't come back to this blog because you don't belong here.

The four men of Cosmonauts are some hard working cats and are always on tour. Check out their facebook for dates because I am sure you can find them in your area soon enough. Also check out all their stuff on bandcamp. You'll need to do some extra clicking to buy things and it is worth it. Listen and love it.

So, this little release is a bit over a year old and we all know that if it is older than six months and younger than 20 years then it is no longer relevant. But that isn't going  to stop anyone from sharing it with you. Sultan Bathery is a groovy little three piece from Italy. These three gents seem to be making some splashes here and  there with interviews here and there and blog shout outs here and there and some facebook fans here and there and today we listen to the band's first EP, Fireworx - released in October of 2012. They have  since been touring throughout Europe and a quick  overview of the facebook doesn't say anything about  any US shows, but if you find something out that I  didn't bother taking the time to read (let's face it, google is for information and this blog is for  music) then please throw it in the comments.

The EP starts with the title track - a little ditty with beefy guitar tone, simple and effective drums, and the oooo and ahhh sort of vocal dissonance that so many of you listeners out there have grown to love since its popular re-emergence in the early 2000s. It is a great opener that will get your attention. The second track, 'River raw', does not stray far from the jangle and dance in the first track - the entire fucking EP follows suit. Fireworx dips its toes in a lot of seemingly 1950s inspired sort of western rock and roll on the berge of psychedelic breakthrough. And for the sake of not getting all meta with this and that - these are some good psychedelic garage tunes that are all under 2:30. Who can get enough of those short punch-you-in-the-mouth-songs?

You can snag the 7'' from Slovenly for 5.25 (I donated more than that - I just thought I would let you all know that because I take philanthropy lessons from Bono). Only con to ordering from Slovenly would be the occasional e-mail that I choose not to read and then have to take time to delete. Listen. Buy. Enjoy. 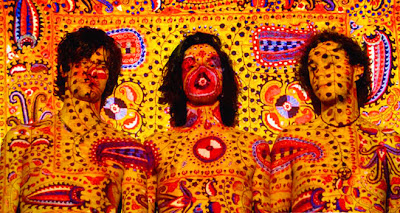 Although not the freshest piece in their arsenal, let's take a listen to the self-titled four track release by Uh Bones. This little goodie came out a bit over a year after their debut on facebook in 2011 (which, as you know, marks the birth of a band - that and the earliest release date on bandcamp). This three piece is currently rocking in the Chicago area and working on an LP to be released in the near future - duh. We might as well dive right on in with track number one, 'Amess'; if you carry any garage or psychedelic (god forbid psychedelic-garage) sensibilities you will immediately see the credibility of this band's sound. The song is an instant winner with repetitive high-mid guitar riffs and a low pulse'd bass line. The songs continue to follow suit with tight grooves wrapped around lazy and genuine vocals. If you are looking for something that takes root in yesterday (maybe today's yesterday or maybe 50-years-ago's yesterday) while still playing a part in our post-music era then look no further - it's right here. Even though we may not see Uh Bones putting out chart-topping-billboard-success-singles, the band knows what it is doing, how it wants to do it, and they sound great doing it.

I'll also put up this video the band has of a newer song of theirs - 'Drink to Sleep.' As the title suggests, the song is a bit dreamy and will get you in the mood to take off your socks, pour a drink, grab a woman, and dance on the kitchen floor smoking a filterless cigarette and waiting for the baby-making to happen.

The band is good, so if you like that 60s influenced blues-born garage noise then take a listen and maybe spend four bucks for four songs.